If the sound that woke me up had been a street-cleaning truck, a shopping cart, an argument, or the dumping of glass bottles, I would have recognized it, gotten annoyed, and gone back to sleep. This, though, was unfamiliar. I rose to lift a blind slat. I like to know what's going on my street. And I was curious to know what sounds kind of like popping popcorn, but more sonorous and metallic.

I guess I had never heard a burning electric utility pole. The fire was about halfway up the pole, with long flames going up just one side. Bright yellow-blue flashes matched the pops. Sparks sprayed in the lost rhythm of a dying machine. At the base of the pole, fallen power lines tried hard until the end.

The pole was close enough to my house -- between ten and fifteen feet -- that it seemed wise to get out as fast as possible. I was worried about what would happen as the rising flame reached more and more cables. I made sure Tom wasn't home, put on pants, failed to remember where the circuit breaker was, got my laptop, and left out the side gate, calling 911. Reports were taken: yes, cars and a tree; no, no hazardous materials. Assurances were made. And then my role was over, and I was on the street, looking like any of the other onlookers, though the least clothed among them. 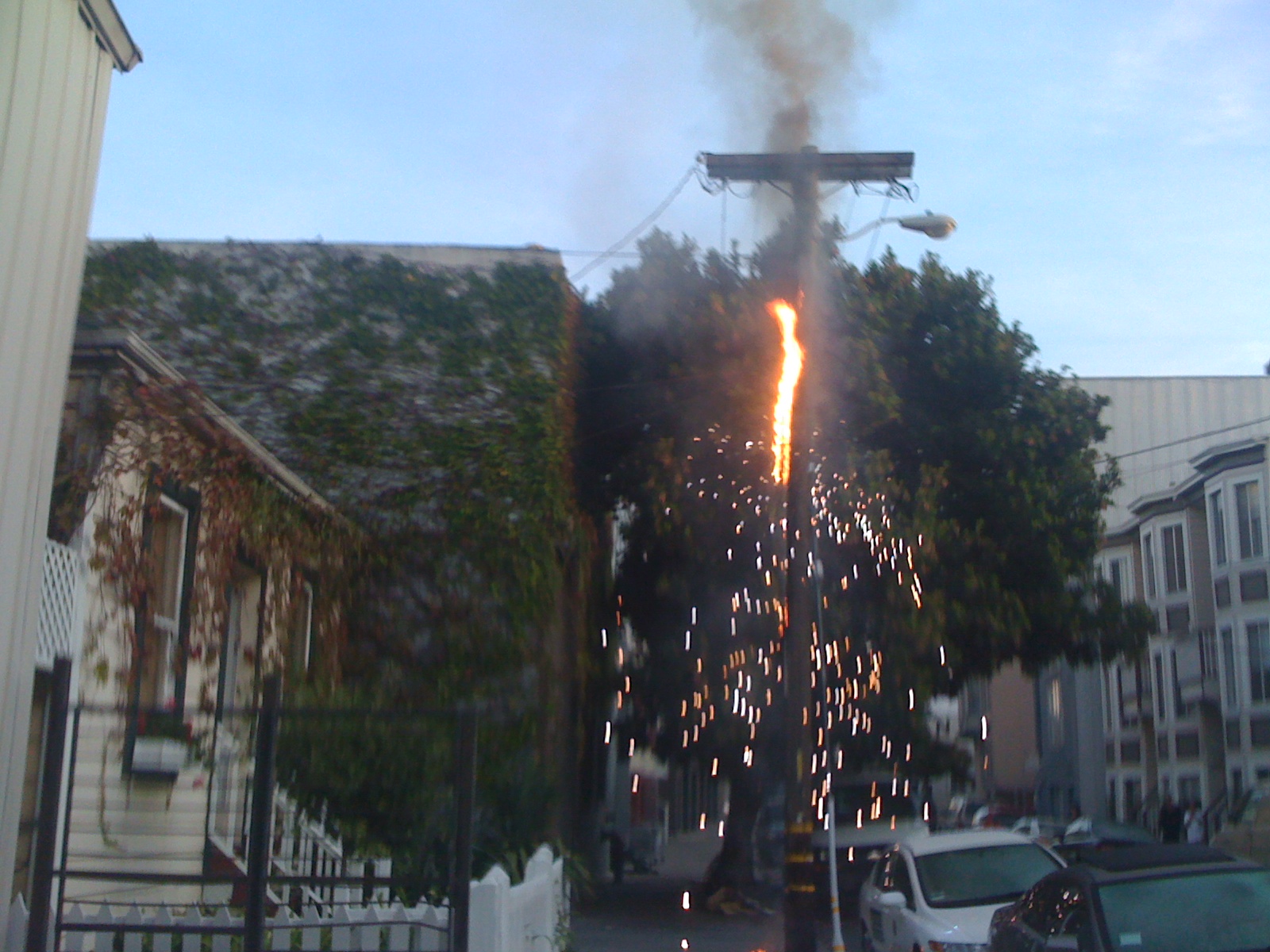 Inside, the fire had been been threatening me. Outside, it was just a fascinating scene. Though the house and everything in it was still at stake, nothing felt urgent. A woman who works at the coffee roasting warehouse next door invited me in. She offered me socks to wear, and a glass of water, which I accepted, and coffee, which I didn't. Sacks of beans were stacked neatly throughout the building. She showed me how the unroasted ones are white, or pale orange, and nearly odorless. We waited, and talked about our lives until the firemen came.

The flames died quickly, though the sparks held out. A cloud of white mist hung in front of my house, which was getting bathed in sinusoids of water. Won't need to water the lawn. Then after a while, somehow, the sparks end too, and that's pretty much it: it's safe to go home, and I do, promising to return the socks. My house has lost power of course, and the mist lingers, but the world hasn't really changed. What changed was my gained awareness of the ever-present fabric of possibility. I had been shown the dice.

After that, I don't bother with a shower -- the water will be cold, and vaguely electric. I brush my teeth, dress properly, and head to a cafe, far earlier than I would have even been awake. Walking a city's streets in the early morning, people are scarcer, so their actions seem more meaningful: A woman throws handful after handful of birdseed out onto the parking lot, where a crowd of pigeons feasts frenziedly. A man wheels a palette of egg cartons into the side door of a restaurant. A grocer neatly balances two more banana bunches on top of the stack he's already made, ready for the world to walk by. The owner of the corner-store hoses down the sidewalk in front of his shop -- I feel like I have something to say to him, but I don't know what. Somehow, today, I feel that I can see a little further down the edges that connect me to the world.